Passive 3D systems offer inferior resolution when compared to Active 3D because each eye only gets to see half of the image lines on the screen.

That post has received some good and insightful comments that made me rethink my position… and come to the exact same conclusion that the statement above is indeed a myth.

The comments did give a very good insight into where the source of the confusion lies when discussing this so I decided to revisit this subject with a more detailed explanation of why I think the statement is a myth and why the refresh rate of the television or the frame rate of the source material are largely irrelevant to the discussion of the merit of this statement.

Active glasses (back) shut out each eye in turn, passive glasses (front) filter the light

First, let us get some background on the subject and get our terminology straight as this turned out to be one of the major sources of confusion. Yours truly was not the least to blame as I myself succeeded in hopelessly mixing up terminology.

Active vs Passive
The challenge for any 3D system is delivering different pictures to each eye. Both active and passive 3D systems use glasses to achieve this but there is a fundamental difference. Active 3D glasses shut out each eye alternatingly whereas passive 3D glasses filter out the wrong picture, letting only the right one pass through to the eye.

Resolution
This is of course an important point to address as this term is used in the myth. Resolution actually means a lot of things and the definition of the term in Merriam-Webster’s free dictionary is a long page listing 6 different meanings some of which even have different variations. For this discussion we will be using this one:

It is interesting to note that Merriam-Webster is not mentioning the use of the term resolution in discussions about audio though it obviously is used there a lot.

Spatial vs Temporal Resolution
In video, a whole sequence of images displayed in turn creates the illusion of movement. It is clear that both the spatial or angular resolution of the individual image frames as well as the temporal resolution of the image stream in time, the framerate, play a big role in perceived video quality. In 3D another factor is added, as the different images perceived by both eyes are blended in the brain to form a 3D video.

Progressive vs Interlaced
These terms originate from traditional CRT televisions and analog broadcasting systems. Basically when a picture is built progressively, the cathode ray in the television would start at one corner of the image and then beam the image, pixel by pixel, one line after the other until the full image was drawn, then start all over again for the next picture. In the beginning this could cause issues where the corner in the screen where the pixels were drawn first was already fading by the time the cathode ray gun would reach the last pixels of the image, giving a flickering, shimmering kind of effect. They came up with a way to counter this called interlacing. With interlacing the gun first scans all the even lines, reaching the other corner of the image twice as fast, and then would scan the odd lines of the image in the second pass. This was a very effective way to counter the shimmering effect back in the days of early CRT televisions and it has stayed with us ever since.

Framerate
This term refers to the rate at which different still video frames are shown to create the illusion of movement, usually measured in frames per second, or fps for short. Generally this term is applicable to the media source, e.g. a film or video game.

Film has traditionally been shot at 24 fps. This is also often called 24p. So in a traditional 2D film strip, one second of film consists of 24 video still frames, as shown below.

In a 24p 3D film, there are 2 times 24 images. For every moment in the film there is a still frame for the left eye (green) and one for the right eye (red).

Currently some film makers are experimenting with higher frame rates for their films. Both 48p and 60p frame rates are good candidates for future film standards. Below is that same second of 3D film, shot at 48p or 60p respectively.

Interesting as this subject may be, I will show that it is irrelevant to the discussion of whether the myth is true or not.

Traditionally televisions would have refresh rates of 60 hz (or 50 hz in Europe) but recently they more often than not have higher frequencies of 120 or even 240 hz. Again I will show that this is mostly irrelevant to this discussion.

Fields vs Frames
A television with a refresh rate of 60hz in interlaced mode renders only half frames, either the even or the odd scanlines. So we call what is rendered each pass a field. Two fields make up one frame.

Modern televisions don’t have a cathode ray gun anymore so the whole principle of interlacing is largely irrelevant for them, but when it comes to 3D it is making a reappearance in a new form in passive 3D television systems. So even though the term field from traditional interlacing isn’t directly applicable to modern televisions, it could be convenient to use it for the image that is rendered by the television each pass in it’s refresh cycle, to keep it distinct from the term frames which we will reserve for the source material.

Motion Interpolation
This is the technique of generating in-between frames to bridge the gap between the relatively low frame rate of the source material and the potentially much higher refresh frequency of the display technology. As this topic can make an already difficult discussion even more confusing and I think it is also irrelevant to this discussion I will largely ignore it.

Busting the myth
To bust the myth I would like to present an example. A single frame of a 60p 3D movie displayed on a 240hz 3D television, comparing active and passive display systems side by side. As we are talking about 3D, a single frame of film actually consists of two images; one for the left eye and one for the right. I’ll color these red and green as we have done in the pictures shown before. Now when displaying 60 fps source material on a 240hz screen, every field would repeat the same frame four times. The way these are repeated differs in active and passive systems. Have a look at the diagram below: 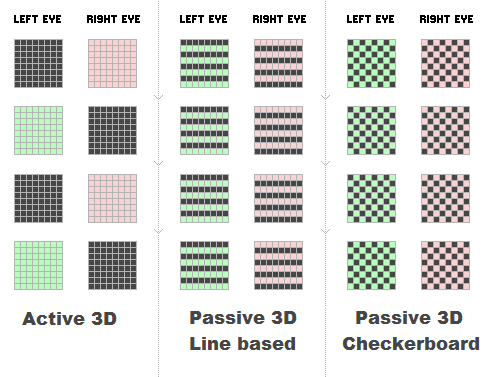 The colored pixels are showing the image and the black pixels are ‘blocked’ or ‘blacked out’. On the left we see active 3D. Here alternatingly the left and right eyes are shown a picture and a black field. On the right we see two ways of doing passive 3D, either alternating horizontal lines or a checkerboard pattern. Columns are not a good choice as in 3D the two camera’s are only at different positions on the horizontal axis (they are next to each other) but not on the vertical axis (they are at the same height) so the images are vertically much more alike than horizontally.

As you can clearly see with both the passive technologies your left and right eyes combined get exactly the same amount of displayed pixels (as opposed to blocked or blacked out ones) as with active 3D. But the patterns on the right are much more regular than the alternating pattern on the left, which should result in a much more stable, flicker-free picture. Remember, this is a single frame of 3D video, consisting of two images, one for each eye.

Now even though resolution is halved in both systems, one could maintain that passive systems discard half of the information in each frame because it only displays half of the scanlines of each image. That is where 3D interlacing comes in. In 3D interlacing a similar technique is used as in traditional interlacing where first all even scanlines are shown and then all odd scanlines, but in the case of 3D interlacing the scanlines shown in the second pass are drawn in the same position as the ones in the first pass. If we were to apply 3D interlacing to the left image of a single frame from a 60p movie with line based passive 3D like we showed in the example above, the four fields rendered for that single frame would look like this:

In the full frame, on the left of the arrow, we colored the even and odd lines in a different shade of green to be able to distinguish between them. We can see in the four fields on the right that alternatively the even and odd lines are shown, albeit always at the position of the even lines. The brain does receive the extra detail from the odd lines but has to do some work to reconstitute the original frame.

LG is one of the companies pioneering this 3D interlacing technique and they recently received certification that their technique delivers Full HD in 3D by VDE, a german certification company.

Active vs passive 3D in practice
So far for the theory, but how does this work in practice? Which technology really does give most detail and which is most comfortable to look at? For a good comparison of both technologies Displaymate did some hands-on tests with four different televisions, two active and two passive systems. They are strong in their opinion that the myth is busted:

So there you have it. Theory, practice and certification offices all agree: Passive 3D does not halve resolution compared to active 3D. Please share your thoughts on this subject in the comments below.