Just after midnight on monday I posted my first sports-related post. I’m not much into sports myself but I happen to know someone who is and often makes predictions about sports matches that come true. So I thought it would be fun if he would share some predictions about the 2014 World Cup that is drawing to a close right now. So I wrote a post about his World Cup predictions.

The Oracle’s first prediction was on the money 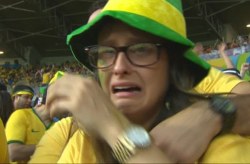 My ‘Oracle’ as I will call him from now on predicted that Germany would convincingly beat Brazil. Well it does not come much more convincing than winning with 7 to 1!

The Brazilian supporters where shocked at what they were seeing. Germany walked all over Brazil and they are off to the finals!

Tonight the match of Netherlands versus Argentina will be played. The Oracle has calculated that if the Dutch team scores 3 goals, they will still end up with as many goals as the Germans have, even after their 7-1 victory. He seems to think it’s very well possible that exactly that will happen. I’m sure hoping it does!